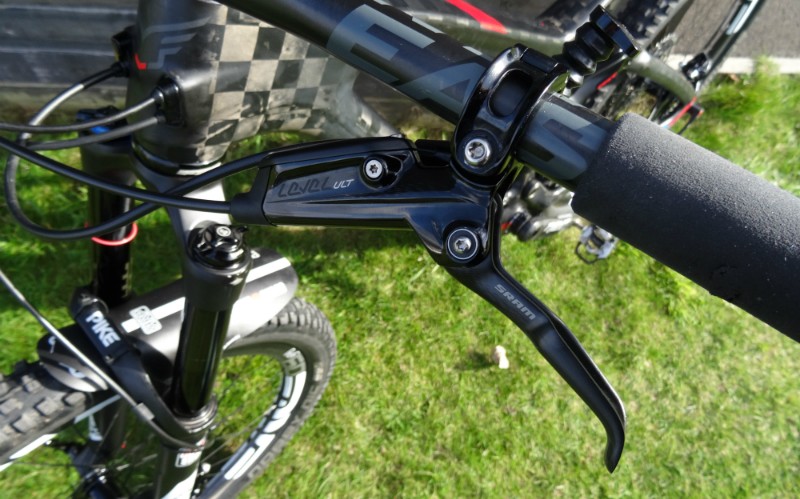 If SRAM's new Level disc brakes were a footballer, they would be a pre-tattooed Lionel Messi. They are a beautifully engineered, minimalist and unassuming brake; no fancy haircuts or gimmicks here.  They are diminutive and elegant, but with control far beyond their size. Wiggler Steve Kitchin tests it out, and reports back on his findings...

Last year, SRAM launched the SRAM Guide RSC Disc Brake, and it won just about every test it has been in. The icing on the cake, saw Frenchman Loic Bruni pilot it to a Men's World Downhill Championship victory in September. The new SRAM Level, takes the ride feel from the Guide, and shrinks it into a lighter weight offering suitable for XC and trail bikes; most riders don't need the power to race downhill. The top of the range Level Ultimate weighs in at a slinky 318g, with its titanium hardware!

The SRAM Level brake rolls down into 5 models across lower price points. For this article, we tested the top of the range SRAM Level Ultimate Disc Brake, and look at SRAM Level TLM model, which sits as the next model down in the range and shares many features. 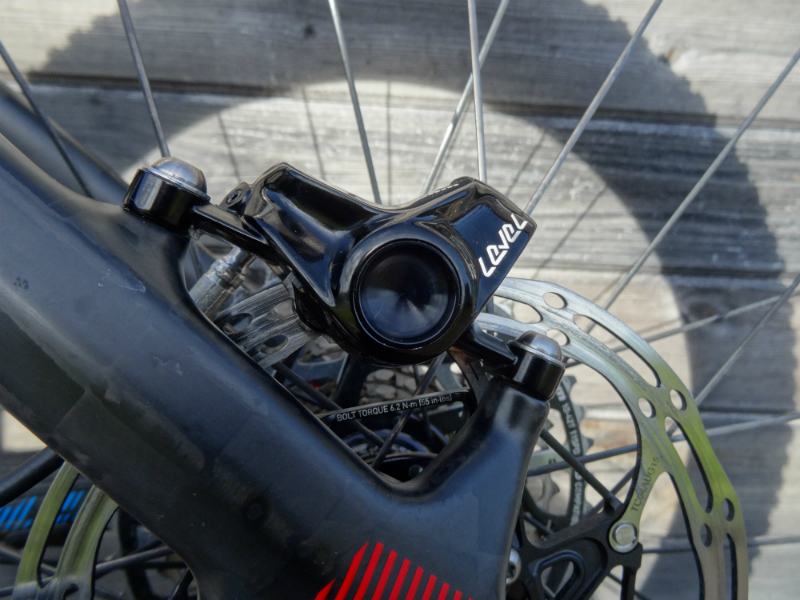 The Level Ultimate lever looks very much like the lever on the Guide brakes, but it has been taken on a serious diet.

The design features a slim carbon lever, with high quality titanium Torx bolts. The lever body is anodised aluminium, with lever pivots moving on a tiny sealed cartridge bearing, adding to the smooth operation. It looks and feels as high-end as its price tag would suggest.

The lever reach adjustment has moved to an allen key, hidden behind the piston, it's a indent step system that allows you to get the perfect lever position. It is admittedly a bit fiddlier than the standard finger twist knob on the Guide, but it saves weight, and it adds to the sleek appearance.

The Guide brake is known for its incredible sensitivity, yet positive feeling; SRAM put this down to a feature they call Timing Port Closure, which controls how the lever pushes the hydraulic fluid through the system. The Level uses the same effective technology. 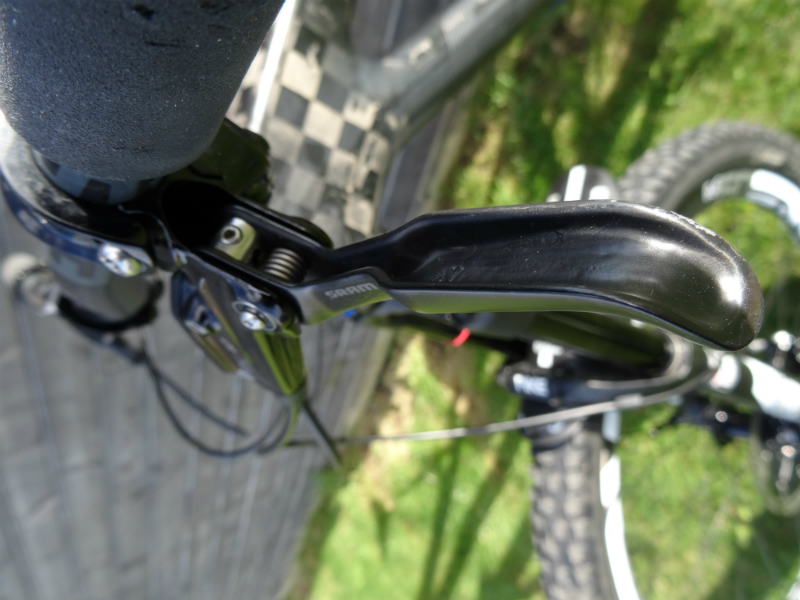 The Guide has a two piece caliper, with four pistons (piston size 14mm and 16mm), the SRAM Level Ultimate and Level TLM have two pistons, but increased to 21mm. Unlike the Guide, the caliper is a monoblock, meaning that it is made from one piece of aluminium, to keep the weight down and sleek appearance up!

Another weight saving addition, is the aluminium backing plate for the brake pads; on the top Ultimate version these would usually still be made of steel.

The tiny caliper has a smart way to stop heat built up: firstly, the caliper is a very open design, allowing air flow around the pad area; hidden between the pads and the caliper though, is a tiny steel plate, which acts as a heat shield to transfer the heat away.

The pistons, have a slippery coating SRAM call "Moly Coated", and combined with a new seal system, contribute to the super smooth feel. 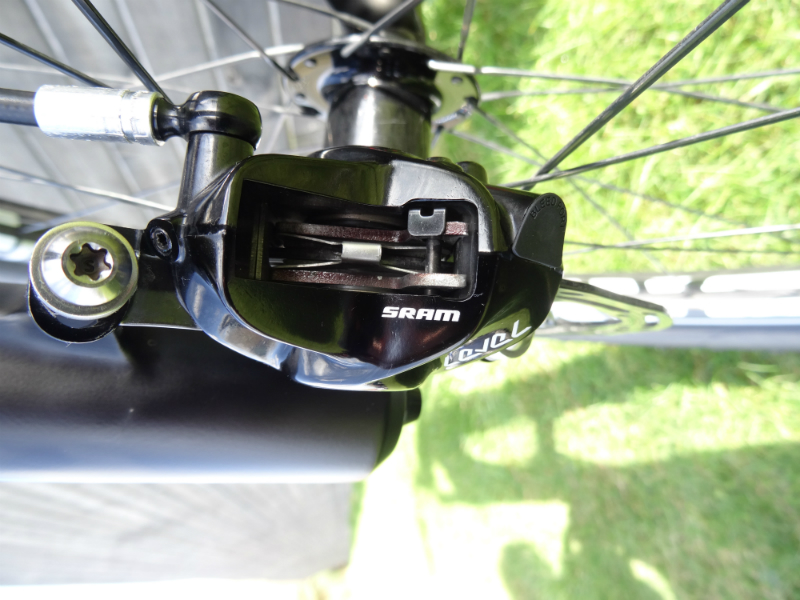 Setting up the brakes

These brakes use "Bleeding Edge Technology", that is the name SRAM gives to its system for bleeding brakes. It is bleeding brilliant! The Level Ultimate and TLM version come with the full bleed kit included.

If your bike has internal routing, or you want to trim the hose down to a neat minimum length, you will need to bleed the system; that means getting it primed full of hydraulic oil, without any air locks. It is by far the cleanest and quickest brake set-up I have experienced: it is a simple job of filling two test tubes with brake fluid, connecting them to the lever and caliper, and then drawing the fluid between the two. I won't go into detail, as this SRAM video covers the process (it's for the Guide Brake but the process is the same).

Setting the caliper in position over the disk was simple too: tighten the caliper bolts, but just so that the caliper still has a little bit of movement. Pull the brake lever to apply the brakes. Then, simply tighten the Torx bolts to fix the caliper in the correct alignment. It is best to work between the two bolts, slowly pinching them up; this will stop any caliper twist. When you release the lever, the pads should now be perfectly placed over the disc.

SRAM have cleverly added a concave and convex washer system, similar to what you see on caliper brake blocks; which allows for any imperfections in frame alignment. Again, it makes set-up quick and simple. 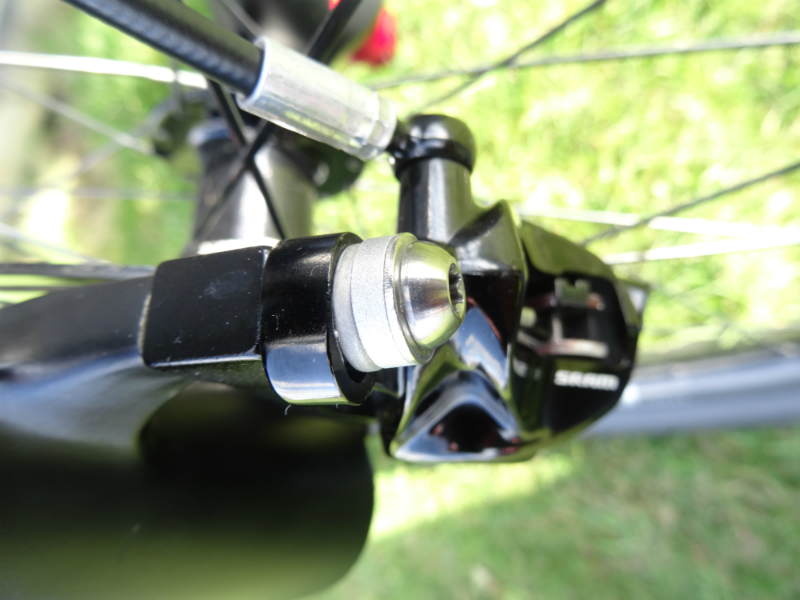 I have been lucky enough to have been testing the new Level Ultimate brake for the last month, and on-trend I have fitted it to the new Felt Decree FRD 140mm trail bike; a bike that came with the big brother SRAM Guide Ultimate brakes, so provided a perfect cross-comparison opportunity.

I have ridden the Level through a wide variety of terrain; most of it in wet, muddy conditions. From Swinley Forest, to my local trails; specifically searching for the steepest technical descents to test the control.

The first thing you notice (or don't notice) is that the lever feels reassuring the same as the SRAM Guide to the touch. The easy set-up also helps with a quiet operation: there is no squealing here. The Level certainly doesn't lack in power, with the two large pistons providing a serious amount of bite, while still offering the smooth control similar to its big brother the Guide brake.

Overall, the Guide would probably have the advantage if I were riding trail centres, with long downhills; as the larger braking surface would in theory not get as hot, with less tendency to fade and also last a longer. However, nothing I did could induce any fade on the Level set-up, and the pads are wearing well. So far, so very good. SRAM have shown how you can have a highly controlled brake, in a minimalist lightweight package. 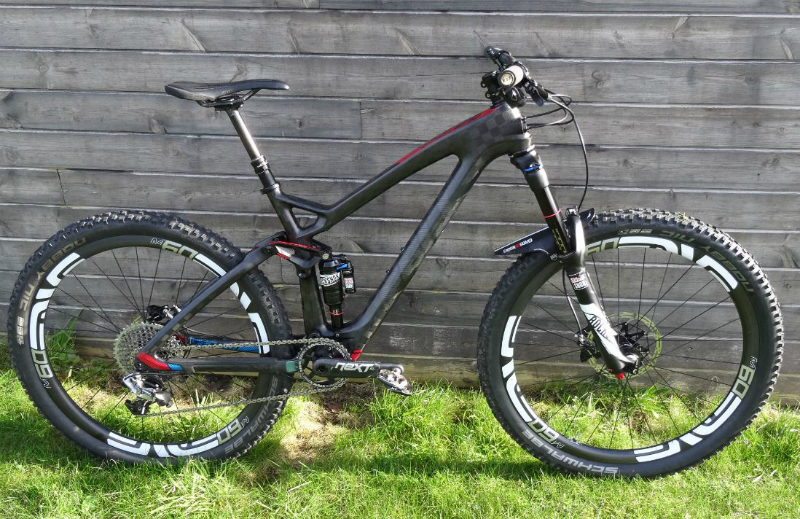 What the SRAM experts say...

"Why Level? That's a great question, especially when our Guide brakes have seen such a huge success across all disciplines, culminating in wins at the 2015 World Championships in both downhill (Loic Bruni) and XC (Nino Schurter). But at SRAM we believe in providing each rider the optimal solution for each individual riding style, terrain and habits. So we embarked on the Level project with one clear goal: we wanted to preserve the solid, consistent feel of our Guide brakes, in a lightweight package, ideal for XC and trail riding – and to have the same feeling and power across all price points, from high end to entry level. Our engineering team combined the invaluable lessons learned over the development of the Guide line, but also worked wonders in making sure everything would fit in a smaller, more compact package that ultimately results in light, yet powerful and consistent brakes. As I love to say, good brake design is an art of minuscule details, and with Level those details were even more crucial to dial in than in Guide. But we managed to fit a lot of the technologies that make Guide so good in a powerful two piston caliper, and we are extremely proud of the result."

"As soon as we were done with the Guide project, we begun work on the next step. We had overwhelmingly positive feedback on Guide’s ride characteristics and consistency, but it was clear that the market demanded a smaller, lighter brake solution to be spec’d across a wider range of bikes. We decided to stick to the proven lever technologies developed for Guide, such as the Timing Port Closure mechanism and the Expandable Bladder, which give Level (and Guide) their solid feel and consistency across a wide variety of riding conditions. When it came time to evaluate the lever design, we focused on our DirectLink solution, which provides a solid, positive lever feel without the larger space requirements of our SwingLink system. This design is shared across the whole Level range, and I am really proud of this, because it means that every rider, from World Cup racers to those who purchase their first mountain bike, will be able to enjoy the work we put in to develop Level. For the Ultimate and TLM models we set out to design an entirely new caliper, landing on a MonoBlock design that provides exceptional power and stiffness for a 2-piston brake. We also used the same Heath Shield found in Guide Ultimate’s S4 caliper, to make sure heat wasn’t transferred from the disc and pads to the system’s fluid. Of course we couldn’t miss the chance to incorporate our Bleeding Edge technology, which allows for clean, mess-free bleeds every time. The 21mm piston diameter on Level Ultimate, TLM, TL and T ensures consistent power across the whole range."

Steve Kitchin has been around the mountain bike scene since the early 90's. No slouch on a bike, Steve won many titles in downhill racing, before turning his Bicycle Kitchin shop team into the formidable Animal World Cup team.

All posts from Steve Kitchin