The complete guide to electronic shifting 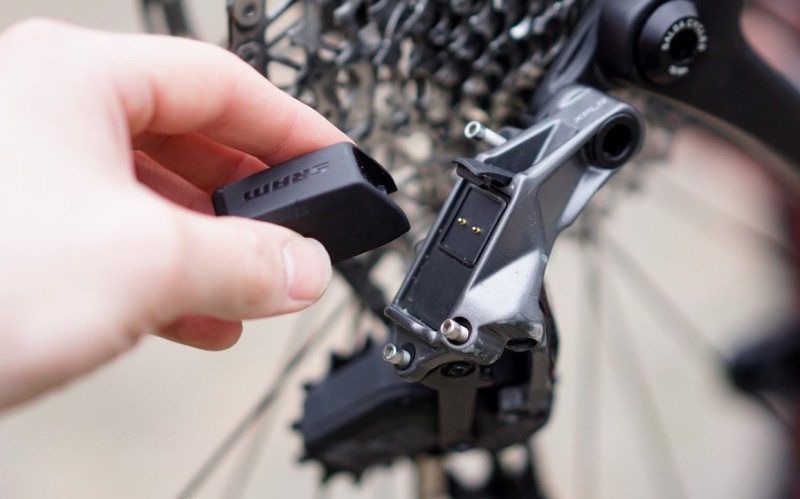 Electronic shifting is now commonplace among high-end groupsets, but what is it? Using electronically actuated motors instead of traditional mechanical cabling, this gear shifting tech promises smoother performance, weight gains, and bragging rights among your fellow riders.

In this guide, we’re going to walk you through the huge range of new e-shifting systems, identify the key brands and models, and help you decide if electronic gear shifting is the right choice for your bike.

In mechanical groupsets, the shifters are connected to the derailleurs using tensioned cables. A mechanical shifter has a ratchet wheel inside, pulling the cable tighter to move up to bigger sprockets (easier gears) or releasing tension to move to smaller sprocket (harder gears) in set increments. The cable coils around the ratchet wheel and stores itself inside the shifter, with a barrel adjuster for fine tuning and indexing.

Meanwhile, in electronic shifting, it’s motors that do the heavy lifting instead of the cable tension. Some systems don’t have cables at all. Instead of a loud click, you hear a quiet motor whirr upon each gear change. This gives you the precise and responsive gear changes with which electronic shifting has become synonymous. 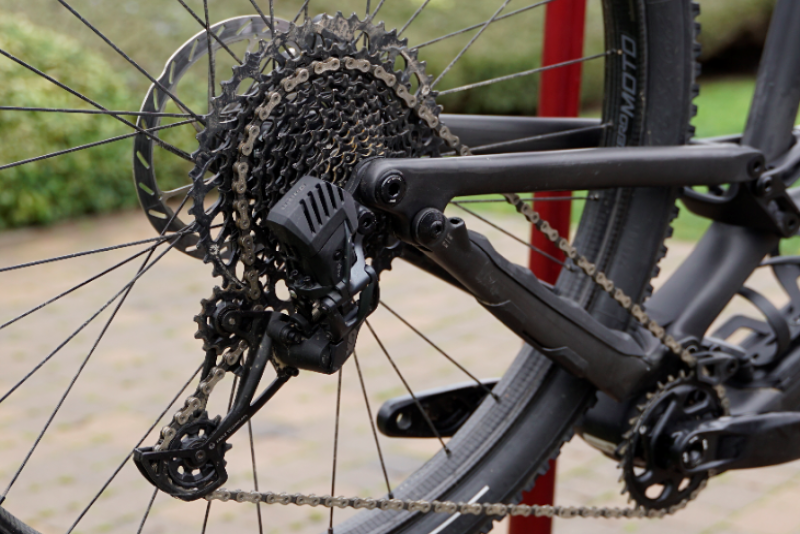 Electronic shifting on bikes stretches back as far as the 1990s. But only recently has it become popularised in the cycling community following its success in competitive environments. It all started with Mavic, who created a prototype called ‘Zap’ in 1992, which was intended to be used in the Tour de France. However, following a catalogue of technical hiccups, it never made it market. Fast forward to 2009 and the launch of Shimano’s Di2; this was the start of the major movement towards electronic shifting. Today, after decades of development, we have big names including Shimano, Campagnolo and SRAM all competing for electronic superiority.

Here's a quick rundown of the three main players in electronic shifting - Shimano, SRAM, and Campagnolo - and how their systems fall into the various hierarchies. 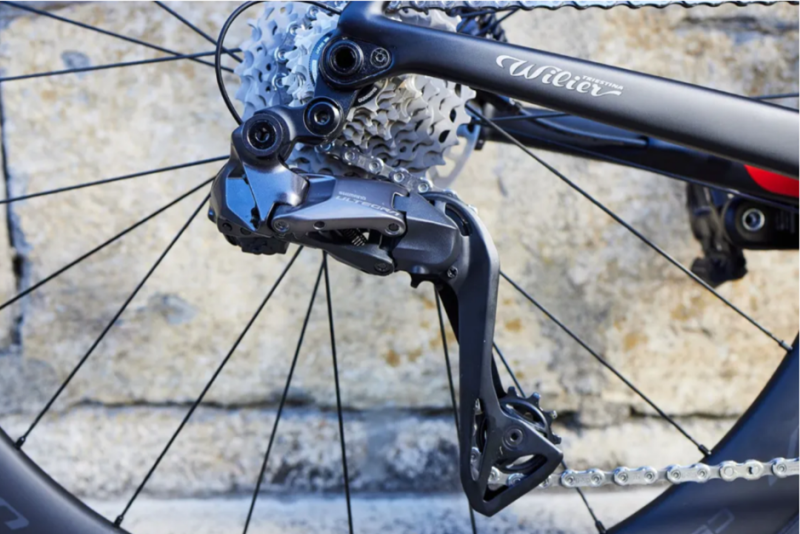 Shimano Di2 stands for ‘Digital Integrated Intelligence’. Its development started in the early 2000s and launched to market in 2009 where its debut in a competitive peloton was in 2010, featuring on the bikes of the Euskaltel team.

Di2 represented a step-change in groupset micro adjustment. In its early days, it featured exclusively as part of Shimano’s famed Dura-Ace groupset and was calibrated using a PC. The system had to be manually plugged into a computer to be set up. It wasn’t until the launch the E-Tube app that on-the-fly setup and adjustment was possible, making the technology a bit more user friendly for the average cyclist.

Di2 caters for 11 speed and, more recently, 12 speed. They have options for both rim and disc brakes as well as 2x and 1x configurations depending on the range. For road, the main product options are the Ultegra and professional tier Dura-Ace model. For MTB, there is the top of the range XTR (R for race) and XT. And for gravel, the GRX. The main difference between each of these groupsets is the materials used and the weight, both of which contribute to the differences in price. There are also variations in some of the features and compatibility offered.

Shimano has stuck with wired and semi-wired approaches. Their wireless shifters – offered only for disc brake models - runs on self-contained coin batteries (these last an estimated 1000km). The battery for derailleurs remains in the seat post, maximising battery life and performance. Battery life is one of the core advantages Di2 offers, with its large battery allowing for powerful shifts and longevity.

Shimano also offers a ‘Synchro’ shifting option, which means that, if you prefer, all shifting can be done using one shifter. This reduces cockpit clutter and weight. 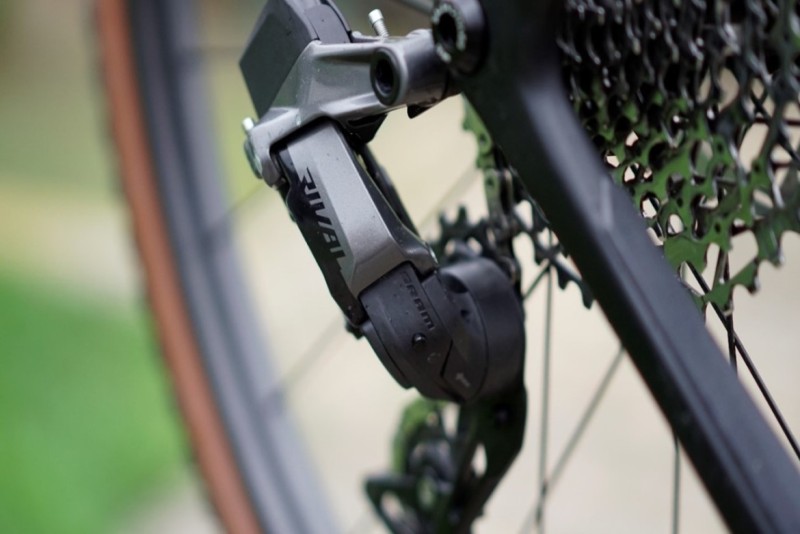 SRAM AXS, pronounced ‘access’, was launched in February 2019 but it wasn’t the brand’s first foray into e-shifting. That started back in 2015 with the pro-level 11 speed RED eTap.

SRAM was the first big name to go for a fully wireless system, leading to the development of its modular AXS system featuring interchangeable batteries and components.

AXS isn’t so much a groupset, rather it’s a technology platform that connects everything. It provides for road, MTB, and gravel, with tailored electronic options for SRAM’s flagship Eagle and eTap ranges, as well as its gravel specific XPLR system.

The platform is noted for its novel rocker paddle shifter switches, allowing for a more intuitive shifting experience (it features most often on MTB setups). The innovative heart of AXS is the ability to mix and match components from different SRAM systems, meaning that, if you really want to, you can use MTB shifters on road derailleurs or vice versa. This opens new doors to custom setups and experimentation.

SRAM differs from competitors in its fully wireless setup and recent update for backward compatibility, allowing new 12 speed AXS products to work on 11 speed setups. For road, AXS begins at the mid-range ‘Rival’ model, moving up to the performance level ‘Force’ and topping out at the pro-standard ‘Red’. These road models also have gravel-purposed alternatives known as the ‘XPLR’ range. For MTB, the AXS range starts at the mid-tier GX and is available all the way up to the X01 and pinnacle XX1 groupset. These include options for both disc and rim options alongside 1x and 2x setups. Like Shimano Di2, the core differences are down to material choice, features and weight. Eagle AXS’s rigidity and Overload Gearbox Clutch has made all models in the range hugely popular on the trails, particularly in the enduro focused X01. This absorbs direct impacts to the derailleur, reengaging and realigning the chain after each hit, significantly reducing the chance of expensive breakages.

Another innovative feature of AXS is its universal battery which can be used on front or rear derailleurs (and even electronically-activated dropper seat posts), and on both road and MTB groupsets. Each battery offers a claimed 20-hour runtime but with each component requiring its own battery, charging them can be a chore logistically. The AXS app allows for remote firmware updates and calibration, making button and shifting customisation even more diverse. Like Shimano Synchro, SRAM AXS offers ‘auto shifting’, which essentially shifts the front and rear derailleur at the same time to move to the next gear to take the best advantage of the gear ratios available and preserve your cadence. With eTap, the wider cassettes take this a step further with single tooth jumps on the six highest gears ensuring your cadence remains uninterrupted. 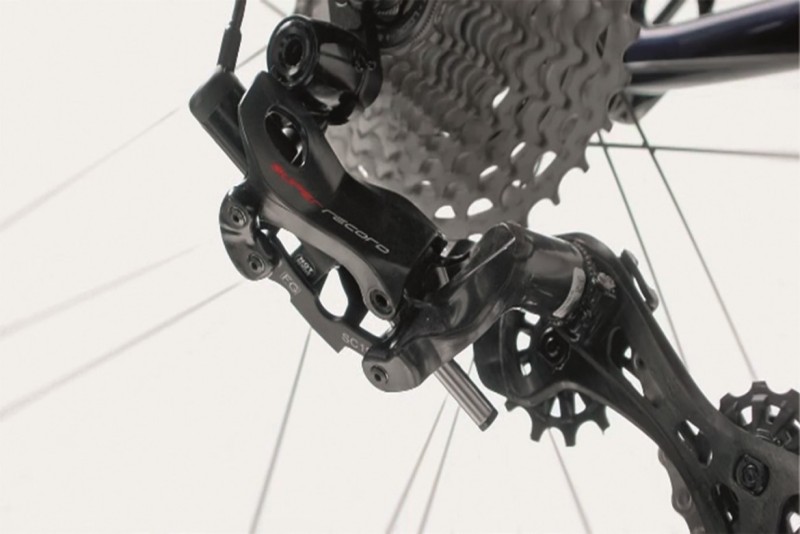 Campagnolo Electronic Power Shift is another big name in the world of electronic shifting. All EPS products are carbon fibre and handmade in Italy, making them some of the most desirable components on the market. Campagnolo EPS shares a similarly long history to Shimano Di2, launched slightly later to market in 2011 after much anticipation.

The EPS range runs from Chorus, up to Record, topping the range with Super Record EPS. The current EPS range serves both 11 and 12 speed and is compatible for disc, dual-pivot rim, and direct-mount rim braking shifters. Campagnolo currently has road options for EPS with potential gravel launches on the horizon.

The EPS series like its rivals offer similar on-board diagnostics and intuitiveness. It comes with its own mobile application, ‘MyCampy’, that can be used to customise the groupsets performance to users’ specifications. EPS batteries last a claimed 1500km, which stacks up admirably against Di2, thanks to it’s wired setup hidden within the bike’s frame. The EPS range shines in its low weight, attractive design, and Italian provenance, preserving its Italian heritage even in an age of radical innovation.

As electronic shifting systems become increasingly integrated into more accessible groupsets, now is a good time to weigh up whether the system is right for you. Your next bike could very well feature an electronic gruppo, so here are some quick-fire pros and cons to give you a flavour of the costs and benefits.

There's no doubting the major advantages of electronic shifting. It’s precise, intuitive, and highly informative, helping pave the way for pedalling perfection. There’s no doubt it will be here to stay and further innovation should be expected soon. Electronic shifting marks a step away from cables and mechanical shifting, but will it replace it altogether? Probably not. Despite its dazzling advantages, the purity of mechanical setups will remain attractive to cycling's army of traditionalists. Still, progress is always good, right?

Get more great content, useful tips and inspiring stories, plus all our latest product releases straight to your email inbox.