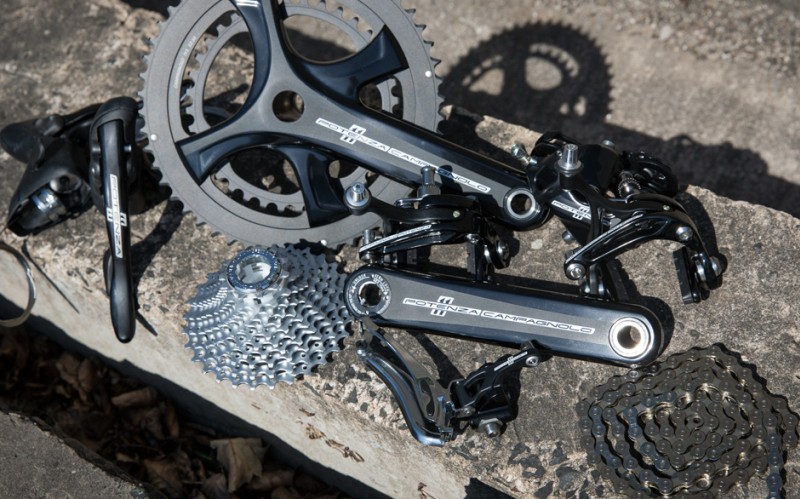 The moving components of a bike are sold together as a compatible set called a groupset. Three manufacturers dominate the groupset market, Shimano, SRAM, and Campagnolo, each of which have driven the development of cycling for many decades.

Their components feature on the majority of the world's bikes, from budget runabouts to the sparkling steeds used by the sport's top professionals.

Groupsets are made up of a variety of components that span the length of the bike, from the brake levers to the rear cassette. On modern bikes, each component is replaceable, giving riders a suite of options to customise their groupset, which they can shape to suit their needs.

The importance of a quality groupset to a well-performing bike can’t be understated. Just as any chain is only as strong as its weakest link, your groupset relies on all its parts operating to a high standard.

There are three main groupset manufacturers; Campagnolo, SRAM, and Shimano. Both SRAM and Shimano make components for road and mountain bikes, while Campagnolo focuses on road groupsets.

Each of these manufacturers provides different suites of components that vary in quality and price, which they have organised into ‘hierarchies’. These hierarchies range from professional quality – such as Campagnolo Super Record – to entry-level, like SRAM NX Eagle.

Complete groupsets can be expensive, but the hierarchy system allows cyclists to upgrade their componentry incrementally over time.  Buying a complete groupset outright is generally cheaper overall, but if you’re not in a position to make such a big investment, upgrading single components is a valid option.

What is a groupset hierarchy?

Manufacturer hierarchies, listed below from entry-level to professional [left to right on desktop, top to bottom on mobile], vary widely in price, but what do you get for your money?

It’s important to note that even the basic set-ups like Shimano’s Claris or SRAM’s X5 still consist of high-quality components that will perform well in most situations.

But if you’re becoming more competitive on the road or the trail, entering competitions, or pushing the limits of your bike, you may reach a point where your groupset is not able to keep up with you.

Of course, as you reach the professional levels, you’ll also find more gradual gear ratios and elements like 11-speed cassettes instead of nine or ten.

All these elements will help get the most from your on-bike performance and give you the best possible platform to develop and push your limits, not just the bike’s.

Should I buy a complete groupset? 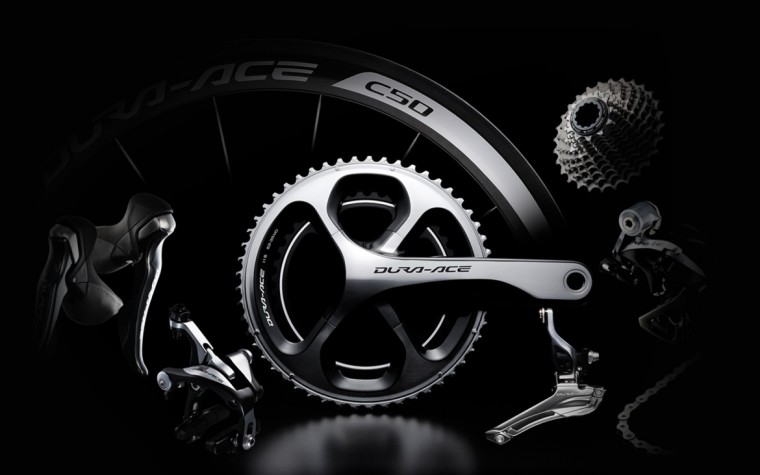 Full groupsets are an option for road or mountain bike riders who wish to develop a bare frame from scratch to their chosen specifications.

It’s also an option for riders who wish to upgrade their existing bike with a completely new suite of parts. This could be to save weight, improve performance, or both.

In either case, a full groupset is a great option as the constituent parts are designed to work best together.

As mentioned in our tip above, it’s not recommended that you mix brands; for example, Shimano shifters will work best with Shimano rear derailleurs. You also need to ensure your components are compatible, even if they are from the same maker - a 10-speed chain will only go with a 10-speed cassette and hydraulic shifters are not compatible with cable activated components…

Component parts of groupsets and in particular transmission elements, such as cassette, chain, and chainrings, are called consumable parts as they wear down over time and need to be replaced.

When enough of them need replacing, a sparkling full group might be the best value option. 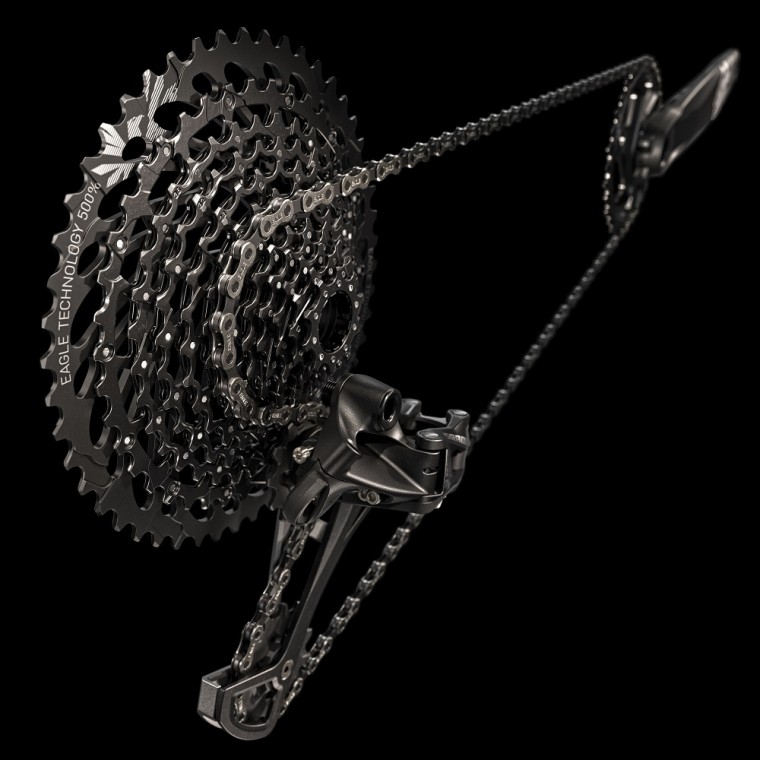 Among professional road riders and accomplished amateurs, the 11-speed cassette has become standard.

The additional cog means wider gear ratios are achievable even in performance situations, which is especially advantageous for difficult hill climbing.

They’re also generally considered to be more efficient and capable of faster shifting. Meanwhile, most upper level hierarchies only come in the 11-speed format, taking the decision out of your hands. If you’re just starting out, or you’re likely to be mostly cycling on flat roads, then a nine or 10-speed cassette will be sufficient for all your needs.

But, if you’re ambitious and want peak performance from your groupset, then 11-speed is the way to go.

Mountain bike riders have predominantly used 10-speed cassettes with two chain rings on the front - usually abbreviated to 2x10 - but in recent years 11-speed cassettes, especially those with a single chain ring in the front, have grown in popularity on the trail.

The 1x11 system does away with the front derailleur altogether, producing a simpler setup where less can go wrong while simultaneously making the bike lighter.

These groupsets use a single front chain ring with a 12-speed rear cassette, which has proved immensely popular with trail riders. The cycling world had to wait until 2018 to see both Shimano and Campagnolo launch their first 12-speed systems.

In June of 2018, Shimano released its first 12-speed system, the XTR M9100. It uses either a double or single chainring, depending on your preference, along with the biggest cassette on the market in a huge 51 tooth format.

What is electronic shifting?

The advances of modern technology have realised their full potential in the electronically shifting gears of modern mountain and road bikes. Well, that might be a little of an overstatement, but the systems are still superb, providing crisp, fast, wireless shifting. Again, the big three manufacturers all provide their own systems. Shimano produce the Di2 system, Campagnolo’s electronic shifting range is called EPS, while in 2019 SRAM launched its latest system - AXS.

AXS represents quite a revolution in terms of compatibility, giving riders the chance to swap components between MTB, road, and gravel bikes, along with a wealth of other features.

In addition to smoother operation, electronic shifting also gives you the ability to jump through multiple gears at once. They also provide connectivity to cycling computers like Garmin, so you can see which gear you are in on screen. The ability to place shifters at multiple locations on the handlebars is also a big plus, especially for time-trailing where every micro-second counts.

Mountain bike groupsets differ from those for road bikes in a variety of ways. One of the first things you’ll notice is the weight and robustness. Road bike groupsets, especially at the top of the hierarchies, are designed for pure speed, using the lightest weight materials available. Mountain bike drivetrains are instead built to withstand impact and put reliability at the top of their priorities.

Road bikes will also generally have a larger chainrings on the crankset - typically 52 or 50 teeth on the big ring and 39 or 34 on the small. Mountain bike double chain rings will more often be in the low 40s for the large and low 30s on the small to aid steep hill climbing and acceleration, while MTB single chain rings are generally in the low 30s.

The rear cassette is often smaller on a road bike as well, again for maximising speed on flat surfaces.

What components are in a groupset?

A bike’s full groupset will normally consist of the following… 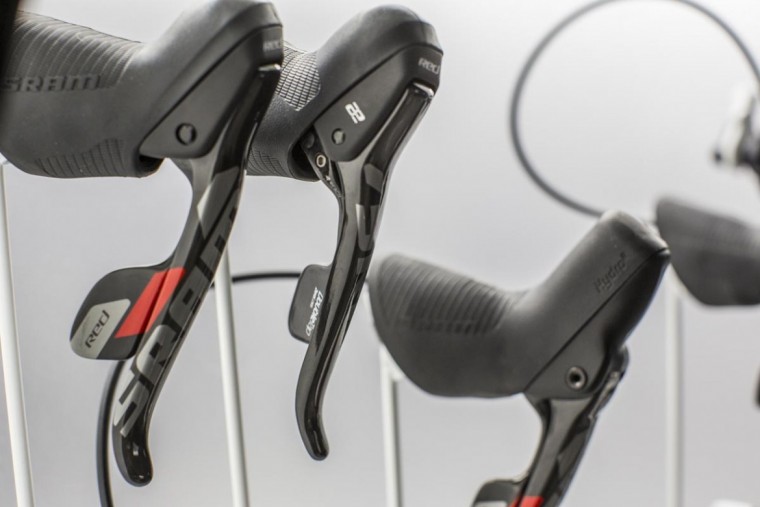 Gear shifters enable you to move up and down the range of gears to suit the demands of the terrain. There are a number of different types but they all do the same job – pulling precise lengths of gear cable to move the derailleurs and change up or down gears.

The front derailleur shifts between chainrings and will have either two or three gears depending on the number of chainrings. The shifter for the rear derailleur operates through the typically 9, 10, or 11 rear sprockets on most road and MTB bikes. SRAM, Shimano, and Campagnolo each have different systems with different names. For road bikes, Shimano’s system is known as STI, Campagnolo calls theirs Ergopower, while SRAM’s system is called Doubletap. 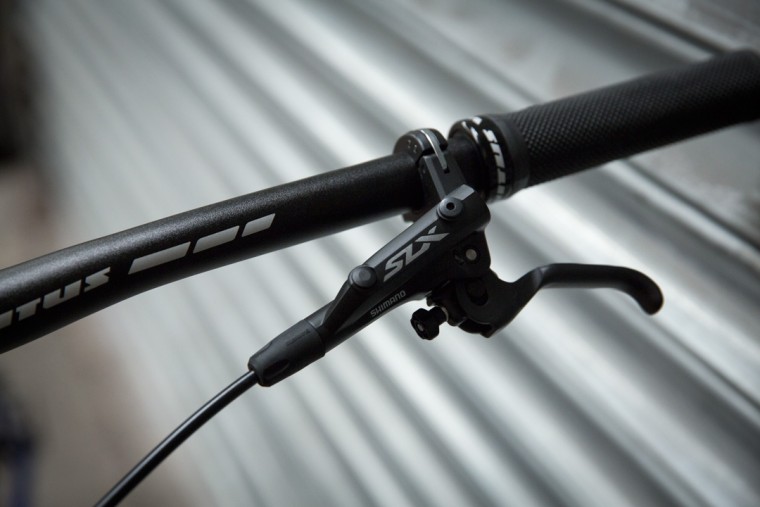 Your brake levers are the small activators mounted on your handlebars that, when pulled, either pull a cable or compress hydraulic fluid to squeeze brake pads either against the wheel's rim or a brake disc, bringing you to a halt. 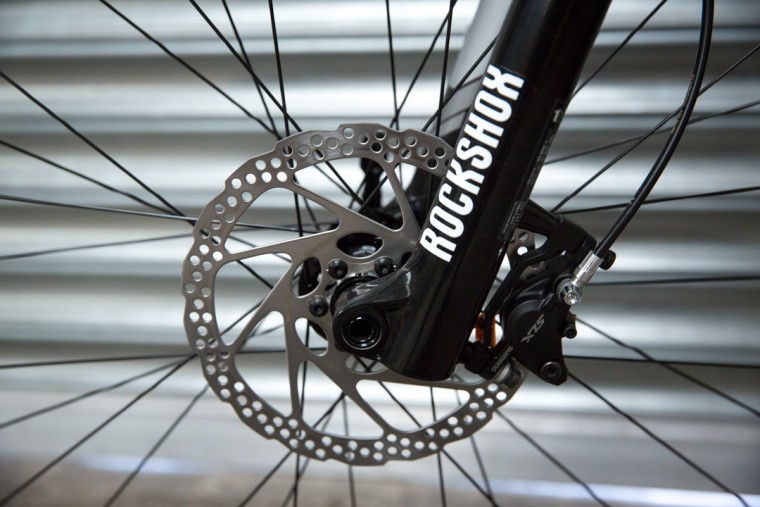 The main type of brakes found on the average road bike is a calliper brake system. Cantilevers and v-brakes were often used on cyclo-cross and mountain bikes but these have almost completely been replaced by disc brakes. 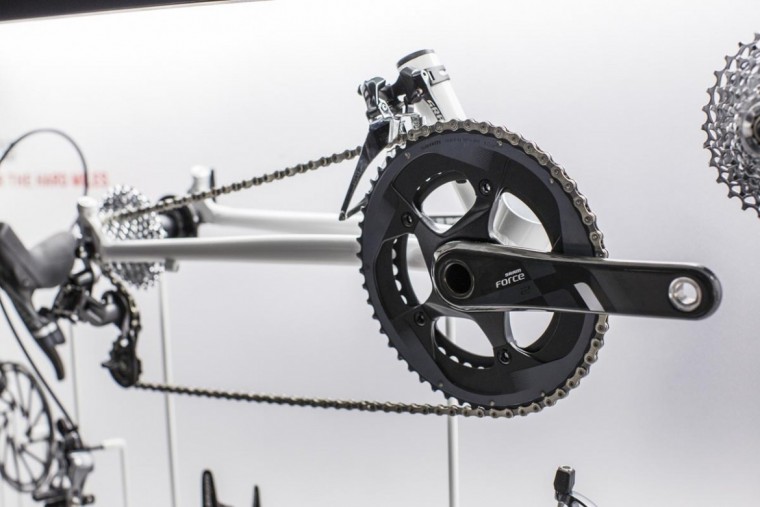 Almost all modern road, MTB, and leisure bikes use the derailleur transmission system.

Taken from the French for ‘derail’, the mechanism uses your pedalling action to ‘de-rail’ the chain from one sprocket/gear to another. Front derailleurs are used to change gear on your chainset, which usually consists of two or three sprockets. The large gap between these chainrings means the front mechanism has to do a lot of hefty lifting while providing an important level of precision to ensure the chain stays in place. The modern mountain bike 1x11 setup has no need for a front derailleur. 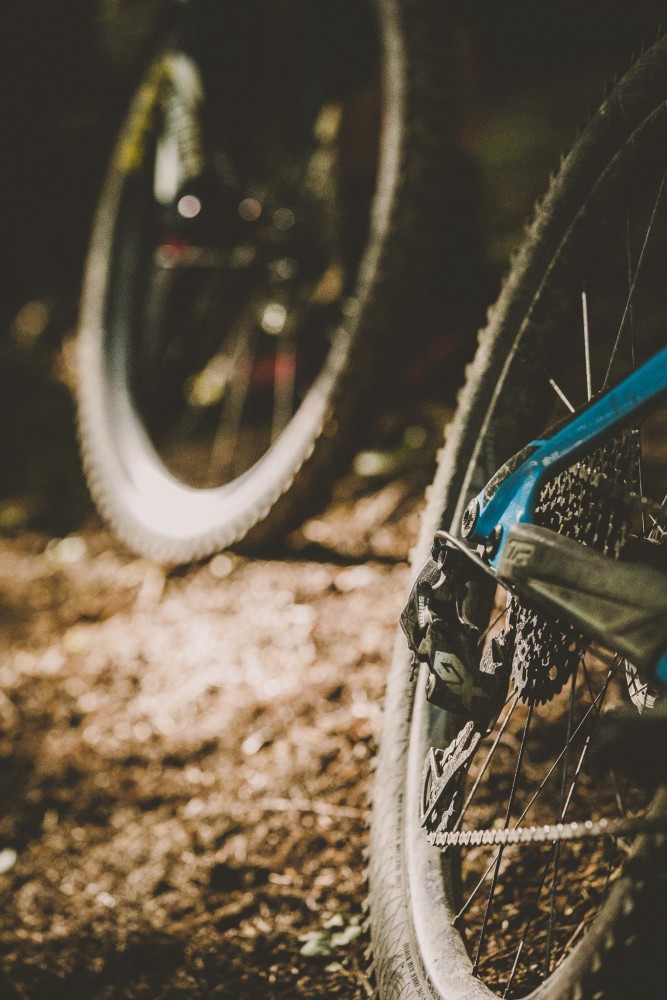 The rear mech (a derailleur is often referred as a ‘mech’) consists of a cage that holds two pulleys or jockey wheels that guide the chain in an S-shaped pattern. It's located under the cassette to take up chain slack. Above the cage is an arm that guides the chain across the sprockets controlled with a spring-loaded mechanism connected to the shifter cable. On electronic systems, there is no cable, with the derailleur changing gears in response to tension or electronic signals from the shifter. 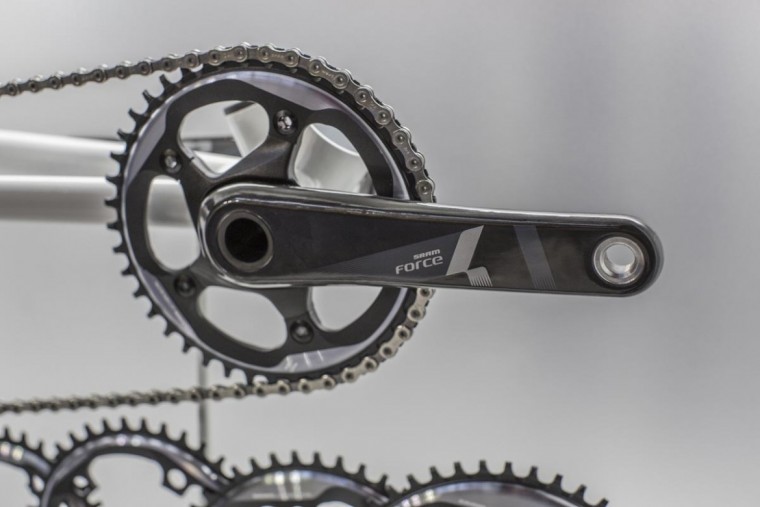 The chainset is the powerhouse of the bike, from which all else flows. If your chainset rattles, is misshapen, or heavy, this will have a huge effect on the responsiveness of your bike and your performance.

We’re sure you know what a chain is and what it does, but it’s not just as simple to differentiate a quality chain from one poorly constructed. Performance bike chains offer links that assist in gear shifts, with small ramps expediting its progress between the gears. Good chains also house the roller pins (inside the chain links) in such a way that they stay lubricated, providing more flexibility and efficient power transfer.

The type of chain depends on your gearing - a 10-speed groupset will need a 10-speed chain. More expensive chains feature wear resistant alloy coatings, and are often lighter. 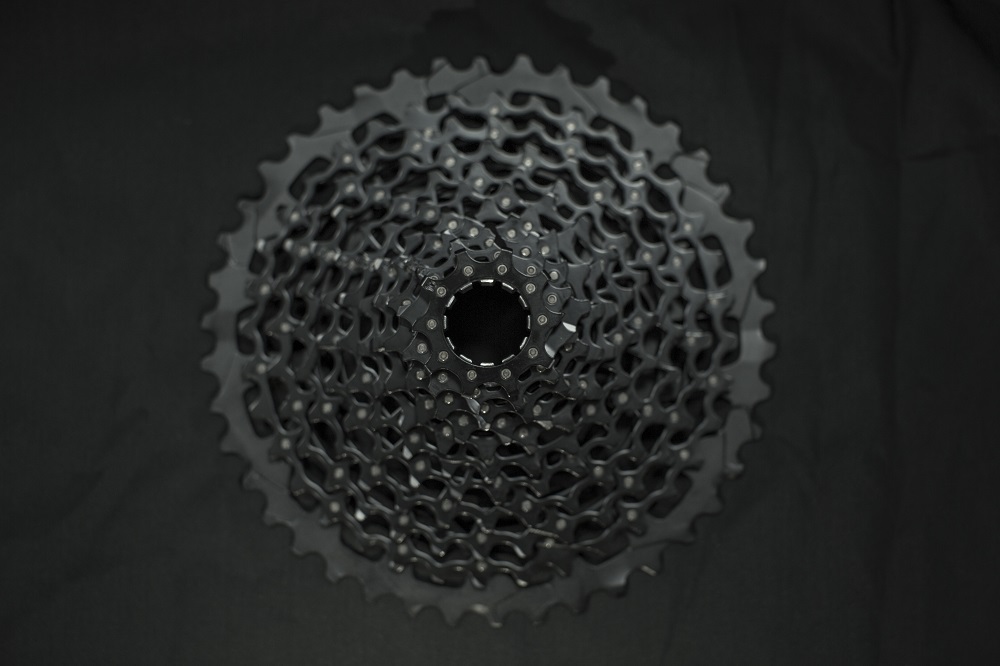 The cassette is the meeting point of all your componentry. Every mechanism, chain ring, crank, and lever is designed to spin the cassette as quickly as possible and, in turn, your rear wheel.

It’s little surprise then that this collection of sprockets can be the most expensive part of your groupset.

The number of gear sprockets on your cassette, combined with the size and number of your front chainrings, determines your bike’s gear ratio or ‘gearing’. 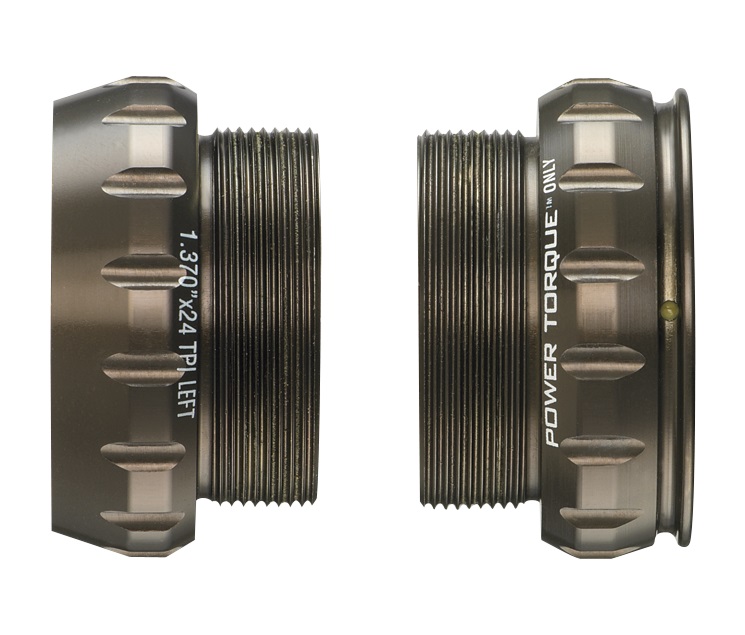 This seemingly innocuous component is the bearing through which your pedal axel passes – it’s the connection between the crankset and the bike’s frame. It may seem unimportant to the uninitiated, but quality in this vital junction is paramount for efficient power transfer.

A good-quality unit, correctly installed, should provide years of trouble-free riding, but bearings can wear out or it can become loose over time. This can cause annoying noises or lead to excess movement called ‘play’ which can damage your frame, so it pays to ensure that your bottom bracket is secure, greased, and in good condition.